An American take on a traditional Japanese bathroom

An American take on a traditional Japanese bathroom

On this master bathroom remodel in Mahopac, NY we were challenged with creating a space that squeezed a lot into a small layout. Combined with creating a bathroom that felt authentic to the homeowner’s Japanese roots, this project was a fun challenge for our team. 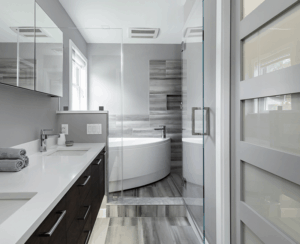 Along with some valuable knowledge from the homeowners on Japanese culture and bathing habits, we teamed up with Allison Miller of Allison Grace Design to help bring the ideas to life. The goal for this master bathroom was a sleek modern aesthetic, with some added wood tones to add warmth to the space.

You can check out more of Allison’s work on her website, allisongracedesign.com.

The bathroom in a typical Japanese home consists of separate rooms. One room will contain the sink, a changing area, and a deep soaking tub that is integrated into the shower. The other room houses the toilet, also known as the water closet. 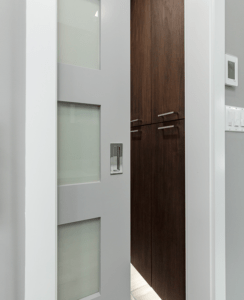 Added custom cabinetry in the water closet for additional storage

Contrary to common practice in America, the bathing process in Japanese culture is more for relaxation than getting clean. The occupant will first shower and wash thoroughly, and then soak in the tub. Soaking in the tub can sometimes be for hours at a time, with some homes having a TV in the bathroom for entertainment. 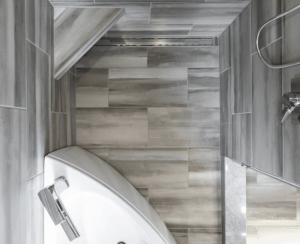 Waterproof enclosure that contains both the shower and bathtub

In order to add a bathtub into the shower enclosure, we needed to relocate the existing toilet, and remove the linen closet. Limited on space, Allison selected an arc-shaped corner tub from Aquatic. The baseboard heat, originally located in the new shower area, was moved to under the double vanity. We custom-built the walnut vanity to maximize the functionality of the area. 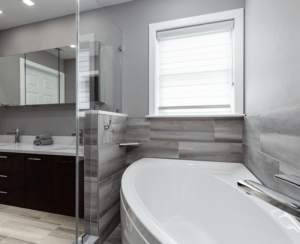 Maximizing functionality with a corner tub by Aquatica.

Stripping the room down to the studs, we were able to add, remove, and reroute the plumbing and framing as needed to accommodate a new space. Limited by the tight floor plan, we chose to install a wall-mounted toilet by Toto, which made a tight space feel more expansive. Another benefit of the wall-hung toilet is that it is easy to clean under and around. 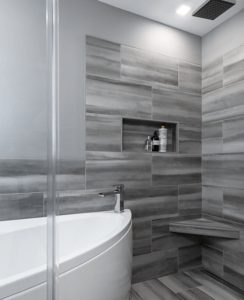 The tub and shower are combined in a single waterproof enclosure. 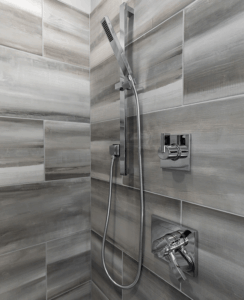 Chrome shower fixtures give this bathroom a sleek, modern appearance. 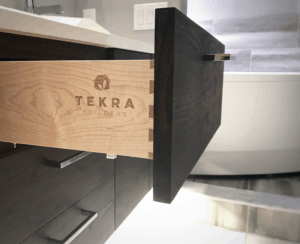 The TEKRA team custom built the walnut vanity to help maximize the functionality of the space.

A team-focused approach early on allowed us to determine exactly what the homeowners had in mind. It was an honor to pay respect to Japanese traditional, while giving it a unique flair. Making this master bathroom remodel feel more like home for the clients was the best part of it all.

TEKRA Builders is a design-driven custom builder and remodeler located in Dutchess County, NY performing work across the Hudson Valley.

The TEKRA Homeowner education series consists of 1-3 minute videos, published on instagram, Facebook and Youtube aimed at simplifying the construction process so you can make more educated choices and feel more confident during your next project. A more in depth article of each topic can be found right here at tekrabuilders.com/blog.

ABOUT THE SERIES
Scroll To Top
We use cookies to ensure that we give you the best experience on our website. If you continue to use this site we will assume that you are happy with it.OkPrivacy policy